I’ve posted an issue on GitHub but I thought I’d share here also, in the hopes that others can replicate the bug and see if it’s not just my setup.

When using expandable cards, they behave as expected on desktop Chrome & Safari:

But if you use a physical device (I’m using an iPhone 6 on iOS 12.4.5) or if you test in the iOS simulator (I’ve tried iPhone 8 on iOS13) the behaviour changes to this:

Can anyone else confirm they’re seeing this bug? Apologies if this has been posted/reported already. 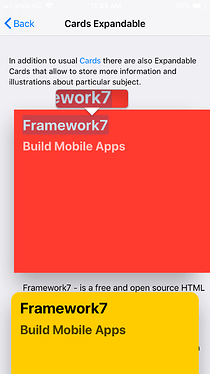 This was fixed in latest update